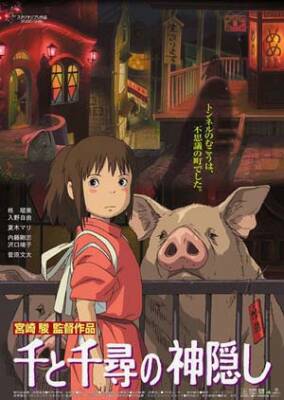 Spirited Away Poster on nausicaa.net

There is something truly special about the film Spirited Away, which was released in 2001. Like other films from the legendary Miyazaki, it endures well over a decade after the initial release. What is it about the movie that makes it a favorite of fans and critics alike? It is actually a combination of different things all working in concert. First, there is the story, of course. Then, you have to consider the beauty of the animation and the world that Miyazaki created. He actually came out of retirement to write and direct this film. He says that he based the story on a friend and the friend’s daughter.

This is what keeps people in love with the movie, and it is what draws in new viewers all the time. In Spirited Away, a young girl named Chihiro is moving to a small town with her family. While they are on the way, they take a wrong turn. Her parents stop the car and decide that they will get out and explore the area. They find what looks to be an abandoned amusement park. Our heroine wanders around the park and meets a boy named Haku who tells her that she and her parents are in danger. When she returns to her parents, they’ve been turned into pigs, and now she must find a way to restore them.

As with all of the films that come from Miyazaki’s Ghibli studio, the animation and the direction is always stunning. Keep in mind that during the time they were making Spirited Away, much of the world started to shun traditional animation techniques and were using computer graphics exclusively. It is a hand-drawn film, and that has been a very rare commodity as of late. Many studios, particularly those in the West, but some Japanese studios as well, were heading toward CGI almost exclusively. After Disney had several flops with their hand-drawn films, they figured that the traditional method of making movies was dead and they began using CGI.

Miyazaki understood something that many in Hollywood and other studios did not at the time. It wasn’t just the style of the animation that mattered; it was also the story that counted. Children love story, just as adults do. When you have a great and interesting story that’s different from everything else that’s out there, as you do with Spirited Away, you will have a great film and the moviegoers will have a great experience. It is different from many films out there, but it has a classical story structure that will always work well.