Grave of the Fireflies on Rotten Tomatoes

The 1988 anime film from Studio Ghibli was written and directed by Isao Takahata. This is an adaptation of a book from Akiyuki Nosaka, and is semi-autobiographical, and it happens to be one of the most powerful movies you will ever see. This is not lighthearted fare, as it is about the life of two orphaned children at the end of World War II. Westerners do not know what this period of life was like for those who lived in Japan, and this poignant and tragic story does a fantastic job of illustrating that.

You Need to See Graves of the Fireflies

Roger Ebert said that Grave of the Fireflies was one of the best and most powerful antiwar movies made, and some have even compared it with Schindler’s List. The children in the film have lost their parents in the war. Their father was in the Imperial Navy, and their mother died in the firebombing in Kobe. The beginning of the movie actually starts with the death of one of the main characters. Much of the film is told through flashbacks, but it is never difficult to tell what’s happening.

The children are left to survive on their own. Even their extended family seems to want nothing to do with them. The aunt they try to live with is exceedingly cruel, and even sells their dead mother’s things to buy rice for herself. The two decide to head out and live in an abandoned bomb shelter. Things are no better for them there. It does a fantastic job of showing just how rough it was for many people, the children especially, in the aftermath of WWII.

As with all of the movies that come from Studio Ghibli, you will marvel at the quality of the hand-drawn animation. It is beautiful, and the artists truly managed to capture the horrors that these poor children had to endure.

Without spoiling too much, when people say that this is one of the saddest films they’ve ever seen, they are not exaggerating. It is sometimes painful and heartbreaking to watch, but it is one of those films that you must see. It also happens to be a great movie to show the uninformed people who think that anime is all about fantasy creatures and robots. This is powerful, moving, and will leave anyone with a heart with some tears.

Seek this film out if you haven’t seen it.

Hayao Miyazaki is most notable for his many contributions to the world of anime, including such classics as Spirited Away and My Neighbor Totoro. However, he had a childhood dream of becoming a manga artist, and that dream never left him. In fact, he’s been working in that medium for as long as he’s been writing and directing films. His biggest work in manga is actually Nausicaa of the Valley of the Wind, which he started in 1981. It became extremely popular and has sold millions of copies around the world.

It was just four years later that he would turn this into the much beloved anime film that we know today.


Uma Thurman and Patrick Stewart discuss Nausicaa of the Valley of the Wind. Disney Video

While we’ll discuss the basic plot of the film, we never want to give away too much. Even older films have those who are watching them for the first time, and there shouldn’t be a time limit on spoilers, particular for a film that’s so worth watching. Still, you need a basic overview of the plot to know whether it might be something you would like to watch.

This is a post apocalyptic fantasy that follows the titular character, the Valley of the Wind’s Princess Nausicaa, as she tries to stop another kingdom from destroying a jungle and the creatures that call it home. She’s attempting to find a cure for the Toxic Jungle and those that live within it.


Nausicaa meets Asbel beneath the toxic jungle in this clip from Nausicaa of the Valley of the Wind. Disney Video

One of the things to note about this film is that there is a US version, which is actually quite a bit different from the original Japanese version. The US edit makes the movie far more kid friendly, but it destroys the impact of the actual film. It’s a far better idea to go with the original Japanese version, especially if this happens to be the first time you are watching the film.

Why Should You Watch the Film?

If you haven’t seen it already, then you really do need to watch Nausicaa of the Valley of the Wind. This is true whether you simply want to watch all of the films from Miyazaki, or you are simply checking his work out for the first time. It is truly one of the classics, and like all of the work that comes from Studio Ghibli, it is beautiful. There’s something truly special about hand-drawn animation that so many of the CGI iterations today lack.

It also has a clear message about finding ways to work together, with tones of environmentalism thrown in for good measure.

Released in 2004, this film written and directed by the incomparable Hayao Miyazaki, is actually based on a novel from a British writer names Dianna Wynne Jones. As with so many films from Studio Ghibli, this film went on to critical success as well as financial success. It made $190 million in Japan and $235 million worldwide. There is a US dubbed version that is available as well, but most purists will want it in the original Japanese with subtitles. Still, the casting for the US version is quite good with the likes of Christian Bale, Blythe Danner, and Billy Crystal taking roles.

Why Is Howl’s Moving Castle Worth Watching?

The best films, whether they are live action or animated, are able to provide an interesting story with interesting character while also providing thought provoking subtext. Now, anyone who is familiar with Miyazaki knows that he’s one of the masters of blending these elements together to create memorable films. In this case, he’s starting out with some great material thanks to the novel.

Sophie is an 18-year-old woman who becomes the victim of a curse from a witch she refused service to at the shop where she works. The curse turns her into a 90-year-old woman. She then sets out into the Wastes in order to find a cure for the curse. She finds a castle belonging to a wizard named Howl, and also meets the fire demon responsible for powering this magical castle. The demon promises to break the curse, but only if she is able to break his contract with the wizard. The demon doesn’t want to continue powering the castle under the order of Howl.

As with all of Miyazaki’s films, there is quite a bit more going on than just this plotline. There is also a war brewing between the nation where Sophie lives and the neighboring kingdom. The story has action, adventure, romance, and more, making it very worthy of multiple viewings. There are a number of interesting twists and turns, and if it is the first time you’ve seen the movie, it will take you into some directions you do not expect.

Of course, another one of the things that helps to make this a great film is the animation. Through the years, Studio Ghibli has always been able to create some of the best looking and interesting anime films. It also happens to have a happy ending, which is not always a given with Miyazaki’s films. 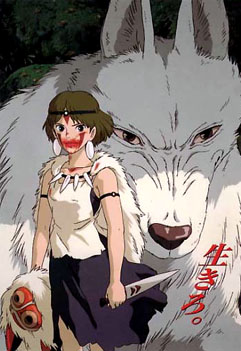 San and Moro. Poster from nausicaa.net

Written and directed by famed anime staple Miyazaki, this 1997 film from Studio Ghibli is arguably one of his most beloved creations. Of course, when you look over his history, it is easy to see that he turns out nothing but gems. In fact, until Titanic came out, this was the highest grossing movie in Japan. It’s one of the most popular anime films of all time, and in fact, you will soon see that there could well be another distant connection to Titanic director James Cameron.

What Happens in Princess Mononoke?

In this story, which takes place in the Muromachi period of Japan, the last Emishi prince tries to make peace between the humans who live in a community called Irontown and the creatures that live in the forest surrounding it. He meets the titular princess, who was raised by a wolf god. He becomes engaged in a conflict between the gods of the forest and the humans. Of course, there is quite a bit more depth and plot to this story, but we want to avoid spoiling too much for those who haven’t viewed the anime yet.

Now, when you compare this plot to Avatar, from James Cameron, you will certainly see quite a few similarities. However, as most fans will point out, Princess Mononoke has many more subtleties and nuances to it than the other film has. While Avatar is certainly not a direct copy of Princess Mononoke, it is easy to make a number of comparisons.

One of the big differences is that the prince is able to see the good that both sides encompass, and this creates more conflict. In Cameron’s film, it’s very cut and dry who the good and the bad guys are. Of course, this causes even more trouble for the prince.

As you watch this movie, and more of the films from Studio Ghibli, you will find that there’s often a theme of man vs. the environment and environmentalism in them. Even though these themes are certainly present, you will find that they never overshadow the story. Instead, they help to make the story, and the struggle of the characters, even stronger. They will resonate with the audience, and that’s always a good thing for any film to achieve. Princess Mononoke is a film that will be enjoyed by anyone who loves a great story and beautiful animation.