This classic from 1986 is one of the most popular and beloved movies to come from writer and director Hayao Miyazaki. It also happens to be one of the most creative according to many. Both an English redubbed version, as well as the original Japanese version, is available. It was actually Disney that officially brought the film to the West and redubbed it. Those who are purists, which include many anime fans, will likely want to try to seek out the original if they can. For those who aren’t familiar with the story and who are looking for a great classic anime, a brief description of the plot follows.

Take a look at what influenced and inspired Miyazaki in creating the film Castle in the Sky in this behind the scenes clip. Disney Video

The story is fantasy through and through, and that’s always where Miyazaki shines. At its most basic, this is the story of a young girl named Sheeta and the search for the fabled air fortress named Laputa, the last of the mighty air fortresses that once filled the skies. At that start of the film, Sheeta is aboard an airship and has been abducted by a secret government agent named Muska. During their flight, a group of air pirates attacks the ship trying to get at Sheeta’s crystal amulet. She ends up falling from the ship, but the amulet saves her from death.

She lands in a small mining town where she meets a boy names Pazu, who tells her that he’s been building a small aircraft so he can search for Laputa. Shortly thereafter, they’re chased by the pirates and then by Muska’s soldiers. We can’t really go too much further into the plot details without giving away too much of the story. Yes, even a film that’s going on thirty years old deserves to be spoiler free for those going into it for the first time!

Sheeta and Pazu are saved from falling with the help from the power of a mysterious crystal in this scene from Miyazaki’s film Castle in the Sky. Disney Video

What Makes It a Classic?

What’s not to love? It has an unusual setting, and you can see influences in the story from a number of different places, including Gulliver’s Travels. The story has adventure, fun, some scares, and an intriguing plot. It is easily one of the top anime movies of all time, and this is backed up by an audience poll of more than 80,000 people. If you haven’t seen it yet, or if it has been a while, it is time to get acquainted, or reacquainted, with this film. If you loved it when you were younger, why not show it to the kids?

One of the most beloved films to come from the Ghibli Studio in Japan is naturally My Neighbor Totoro. It is a magical tale that is written and directed by the legendary Hayao Miyazaki, and follows the adventures of two young girls who move to the countryside with their sick mother. While there, they have adventures involving creatures and spirits in the nearby forest. These creatures are friendly and helpful to the girls, and the story even has a happy ending as the mother comes home from the hospital. However, some fans have taken to the Internet to describe a tale that’s a bit darker – actually, quite a bit darker – than what most people experience when they see the film.

Mei finds a beastly friend in the forest in Studio Ghibli’s My Neighbor Totoro. Disney Video

Some fans believe that Totoro is actually the God of Death, and that the only ones who can see the creature are those who are near to death. When looking at the movie through this lens, it takes on a very different tone. The theorists claim that when young Mei goes missing, she actually drowned rather than simply got lost. Her sister Satsuki goes searching for Mei and calls for Totoro to help her. By calling to the creature, it opens up the realm of the dead, and she then dies as well. She finds her sister and then both of the sisters go to visit their mother in the hospital. The only person who acknowledges seeing the sisters is the mother. She too, is going to die, so it would this too makes sense according to the theory.

There is even an urban legend that goes along with this revised theory of the movie. In the film, the action takes place in Sayama Hills, and in real life, two sisters were once found dead in the area, and the incident occurred in May. In the film, one of the sisters is named Mei, which is pronounced as May.

However, even though there are some out there who are adamant that this is what the movie is really about, the studio that produced it claims otherwise. They say that there is actually no truth to these rumors and that the movie is exactly what most people believe it to be – a warm tale about two sisters having adventures while their ailing mother recuperates in the hospital. Still, it is an interesting theory and a new way to watch the film. 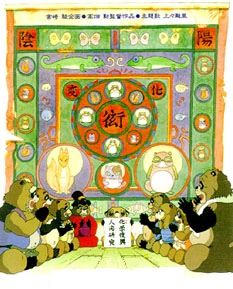 Pom Poko is a very interesting movie at every level, and we’ll try to delve into all ofthose different areas in this post. First, it comes from Studio Ghibli, so you know it is part of a community with a great record for making groundbreaking and unique anime films. The concept came from famed writer and director Miyazaki, and the actual script was written by Isao Takahata, who also directed the film.

What’s the Story of Pom Poko?

One of the things that you will note with some of the other films that come from this studio, such as Nausicaa of the Valley of the Wind, is that there is something of an environmental message to the films. In this story, there is a community of magical creatures known as the Tanuki, raccoon dogs, which are an important part of Japanese folklore. When this story begins, their world is under threat of human development. Cut to thirty years later, and we see that the land of the Tanuki is much smaller and those who still live there are actually fighting among themselves for resources.

One of the elders, the matriarch Oroku, convinces them that rather than fighting with one another, they need to join forces and stop this continuing development of their land.

It is their only hope for survival in this new world. They use their magical skills to aid them in this. The Tanuki are shapeshifters and illusionists, although many have forgotten the old ways. They need to learn their skills in order to press back against the humans. We won’t spoil the story here, but we can tell you that the end is probably not something that you would expect.

What Will You Love?

There are many fantastic things about this film, including the animation and the attention to detail when it comes to incorporating folklore. The Tanuki have several different forms that they can change into – normal animal, anthropomorphic animal, and a cartoon blend of the two. This might look like a kid friendly film, but there are themes and some scenes that may not go over well with the younger crowd. Still, this is an anime film that you really do need to make sure you watch. Not only is it a good story, it really does have a good message about the respect that people need to have for the natural land around them.